especially his favorite story, Little Blue Truck. His hound dog Pepper catches the tennis ball that he throws for her outside in their fenced-in back yard. He received his “wheels,” a Bella’s Bumba made for children with mobility issues, a few weeks ago and races through the halls of Child’s Way, a daycare for medically fragile children located within The Children’s Home, four days a week. His big brother Caleb is three years old and plays dinosaurs with him in their playroom at their new house.

Sam also has Spina Bifida. He is 18 months old and displays the physical milestones of children 12 months younger than him. He is working on his leg strength and is almost ready to crawl. His mom Amy works full-time as a physician’s assistant nearby. She and her husband Michael learned at her 20-week ultrasound appointment that their son may never walk and were encouraged to consider terminating the pregnancy due to “poor quality of life.” They quickly moved to Philadelphia, where her medical team performed fetal surgery in utero at 23 weeks to close the hole in Sam’s spine. Amy spent the remaining 13 weeks of her pregnancy on bed rest until Sam was born at 36 weeks gestation, approximately a month early.

Sam then began care at a traditional facility once they moved back to Pittsburgh, but Amy and Michael immediately knew that it would be difficult for them to manage all his unique needs. She found out about The Children’s Home through a local parent Facebook group, the same group that donated his modified bumbo seat to them, which would normally cost around $1,200. “We have lived (mostly) in Pittsburgh for the past five years and would frequently drive past but did not know anything about it! Once we learned about Child’s Way and went on a tour, I knew immediately that this was the right place for Sam. Just knowing that he had a nurse in the room with him who could – and would – message me throughout the day with questions or updates was a huge relief,” she said. Child’s Way offers five developmentally based classrooms and before-and after-school care from birth to age 21, providing an inclusive and individualized environment for every child. At just $32 a day, parents can also receive scholarships to reduce tuition rates.

Sam’s first words were, “Hi, Dad.” Amy can’t wait for him to talk more and is excited to experience her son’s progress as a family. He goes to physical therapy twice a week, once at Child’s Way and once through swimming on Wednesdays, an activity he’s slowly warming up to. The playground near his home provides plenty of space for Sam to speed through the paved park, building his muscle and gross motor skills. He has nerve complications below his hips due to his diagnosis and birth trauma, wears a CPAP to help alleviate his sleep apnea, and uses a catheter for bladder support.

Sam’s medical complexities are considered “normal” at Child’s Way, though, and the staff treat him like any other rambunctious toddler, updating his parents on his development at a moment’s notice. His Babyland nurse Laura sent videos to Amy when Sam sat up on his own for the first time, clapping and cheering him on excitedly.

Sam has learned, grown, and thrived at Child’s Way for a little over a year, recently transitioning from Babyland to Turtle, the young toddler room. His brother Caleb “Comes in every day with mom. Caleb talks to all the staff and tells them about his day at school,” says Erin Stanley, Director of the facility that recently received its Keystone Stars 4 out of 4 rating.

For the Johnston family, it is “the biggest blessing” to know that all of Sam’s meals are provided, medical insurance helps to offset the cost of attending, and there’s a peace of mind that the team continues to see his potential. Both Amy and Michael are still able to work and provide for their family because of the affordability of Sam’s care at the Children’s Home.

It’s true that Sam Johnston may never walk. And that’s okay. His quality of life has been anything but poor. When Amy told us their story, holding her youngest son in her arms, she said, “He is just like any other kid. And Caleb doesn’t think anything of it. Sam loves his big brother.” That’s how the team – the nurses, educators, and volunteers – view Sam, too. They do circle time with him every week. They sing. They dance. They monitor his pulse oximeter while he naps. They change his catheter multiple times a day. They create art together. They send pictures. They advocate for his care alongside Amy and Michael.  “They…really want Sam to succeed,” she smiled.

You can help children like Sam and families like the Johnstons by supporting The Children’s Home of Pittsburgh, through Pittsburgh Foundation’s Critical Needs Alert on Tuesday, August 9, from 8 AM to 11:59 PM. 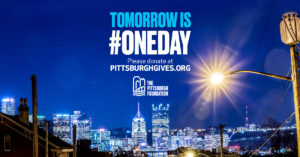 On Tuesday, August 9, from 8 AM to 11:59 PM, The Pittsburgh Foundation and The Community Foundation of Westmoreland County will host a #ONEDAY Critical Needs Alert online giving event to support basic needs and the safety net of essential human services in Allegheny and Westmoreland counties, including those services provided by The Children’s Home. #ONEDAY benefits nonprofits that provide childcare, food and nutrition, and physical and mental healthcare, all of which are addressed and prioritized at Child’s Way.

Your financial support will ensure that families like the Johnstons and children like Sam receive the highest quality of medical, educational, and emotional care. Donate to #ONEDAY, and you, too will help Sam to succeed.