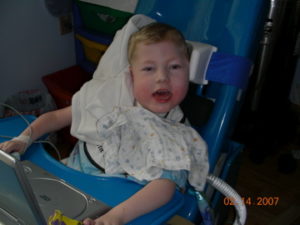 The Children’s Home is proud to announce that December 16th, AJ’s birthday, will be annually recognized as “AJ Smile Day” in remembrance and celebration of the life and joy that AJ has brought to so many during his time in Child’s Way, our daycare for medically fragile children.

AJ was born medically fragile. He needed a ventilator to breathe and nursing care to stay healthy and safe. And those health needs meant traditional daycares were unable to accept him. Like most families, AJ’s parents struggled to stay home and care for him, needing to work and maintain employment.

AJ was turning 9 years old, but this birthday was different than the rest. It was the cut-off age that he could attend Child’s Way, according to Pennsylvania law. Even though Patty Kitchen, his mom, relied on Child’s Way to care for her son’s medical needs while she worked, the law was the law — until she decided to change it.

“Patty came to my office one day to talk about AJ and Child’s Way,” said Randy Vulakovich, then a state representative and soon to be state senator. “She invited me for an eye-opening visit to her own home to meet AJ. And after that, Patty asked me to see Child’s Way at The Children’s Home.”

Rep. Vulakovich got the picture: “In Child’s Way, I was immediately struck by the parent’s circumstance. There was a load taken off their shoulders with this program. I could see in their faces they felt safe dropping off their children, all of which had special needs, for daycare. And that made an impact on me.”

And so, Patty, AJ, Rep. Vulakovich along with The Children’s Home began an uphill battle to change the system, so that every medically fragile child would have access to Pediatric Extended Care centers like Child’s Way after their 9th birthday. 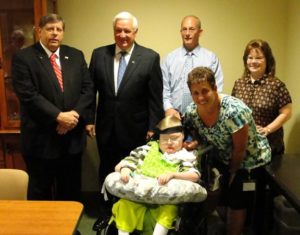 After much work, in the summer of 2012, House Bill 1960 was passed. It extended the age of children eligible for Pediatric Extended Care Centers (like Child’s Way), from 8 to 21 years of age. And that meant for another 7 years, AJ happily attended Child’s Way, until his passing in November 2019.

While AJ is no longer with us, his legacy lives on in the other children now attending Child’s Way and similar centers statewide, who’ve been able to stay beyond their 9th birthday. And for that, and so much more, he will always be a special part of The Children’s Home, cherished in the hearts of those who knew him.